98-carat sapphire "Bismarck" - a gift of the richest American

Magnificent Ceylon sapphire almost 100 years ago became a gift of the millionaire Harrison Williams to his beloved wife. 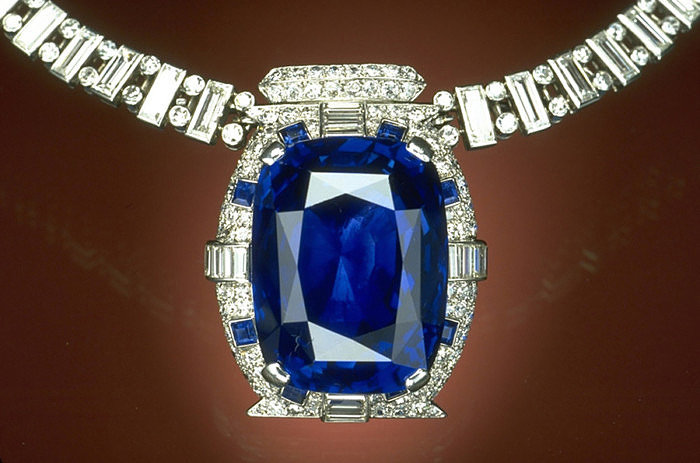 In 1926, Harrison Williams, an American tycoon of 53 years of age, married Monech Bush, divorced and 24 years his junior, - and for a whole year sailed with her on a round-the-world honeymoon on board her own 76-meter yacht. During the parking in Ceylon, America's richest man presented his bride with a cute "bauble" of cornflower blue.

Now a 98.57 carat stone, which later became known as the sapphire "Bismarck", is one of the finest examples of precious corundum. Visitors to the gem hall at the National Museum of Natural History in Washington can contemplate a necklace with this stone in the place of honor between two other famous products with sapphires: a sapphire-diamond necklace of Hall and sapphire Logan. 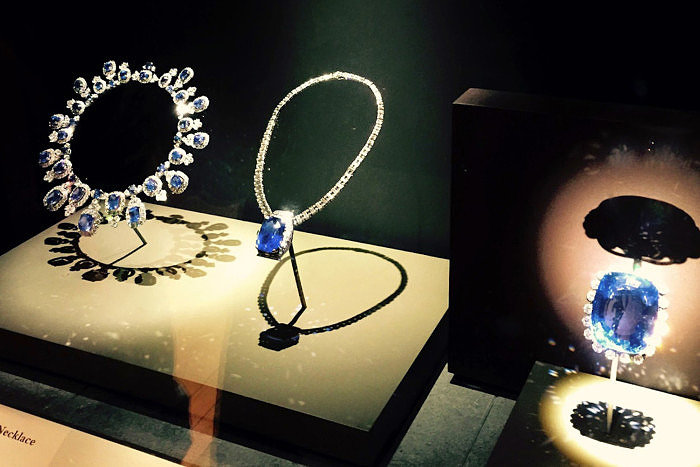 Originally, in 1927, when making necklaces, the masters of the house Cartier inserted the stone horizontally. But when in 1959 Mona gave the necklace for a change, the sapphire was rearranged vertically. In addition to central Bismarck, the jewelery is decorated with eight rectangular blue sapphires, as well as 312 diamonds of baguette and classical round cut.

Gemologists are sure that originally a magnificent blue stone was much heavier than its current 98 carats. Most likely, jewelers Cartier redefined it in order to achieve the best transparency and play of light. It is known that Ceylon cutters, as usual, tried to keep the stones at maximum weight, even neglecting the ideal proportions.

Investing in the utilities, Williams made a fortune that was estimated at 680 million dollars (9.6 billion dollars by modern standards) and earned him the title of the richest man in America. But after the stock market crash of 1929, which marked the beginning of the Great Depression, his condition was reduced to some five million.

However, the couple Williams continued to live on a large scale, and in 1933 Mona was the first among American women awarded the title "The most elegant woman in the world." 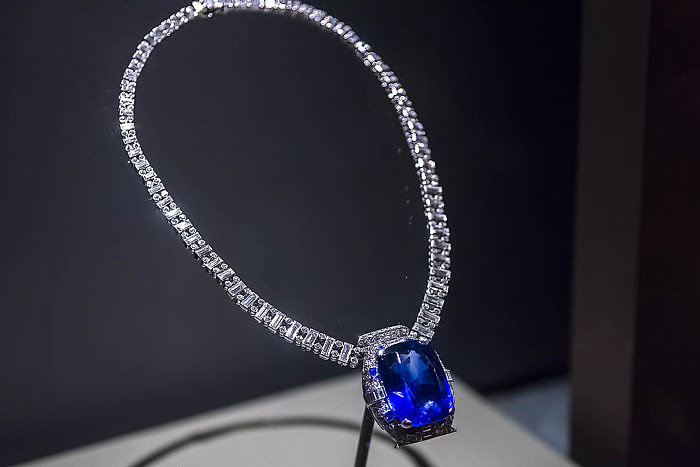 Harrison Williams died in 1953, and two years later Mona remarried - this time for the German Count Eduard von Bismarck, and from that moment became known in the light as Countess Mona von Bismarck. In 1967, the seventy-year-old countess gave her favorite necklace as a gift to the Smithsonian Institution. Mona died in 1983 at the 87th year of her life.

For centuries, the best quality and colorful sapphires of jewelry varieties were mined in Ceylon (Sri Lanka), Burma (Myanmar) and Kashmir (India). As reported by the Smithsonian Institute, Ceylon sapphires usually have a color from blue to moderately blue.

All sapphires are varieties of a mineral called corundum, which is crystalline alumina. By itself, pure corundum is colorless, and all sorcery begins when the structure of the mineral is naturally impurities. Thus, blue sapphires are obtained when the aluminum atoms in the crystal lattice are replaced by titanium or iron atoms. The hardness of corundum is nine on the Mohs scale, which is second only to diamond.

Besides blue, sapphires come in a variety of colors, including pink, lilac, green, orange and yellow. A red variety of corundum is called ruby.